This week we bring you: The LifeSaver water bottle and Jerry cans. What could be more important than the ability to quickly and easily filter water when the Zombie Hordes have knocked out all semblance of civilization taking with it you safe drinking water.

Giant Swiss Army Knife This unique special edition knife contains all 85 tools currently produced by Wenger (Maker of the Genuine Swiss Army Knife). These 85 tools can be used in over 100 functions and it's the World's Largest Swiss…

This Friday we are featuring a deck of survival cards perfect for quick life saving tips or a quick game of go fish on the go, and a fire steel knife combo.

Millions of people lose property every year and some lose life to severe weather every year. Weather can be one of the most destructive and dangerous forces in nature. To make matters worse, it can turn on a dime. When it does, will you be informed? Being notified of such conditions can be the thing that saves your life! Whether it is Floods, Lightening, Hurricanes, Heat Waves, or Tornadoes, when bad weather is on it’s way, you need to know.

Creating alerts of emergency weather, that you receive via email or your phone, is a simple way to stay up to the minute on potentially hazardous conditions in your area or in an area you may be traveling to. Along with the option to receive daily forecasts, Weather.com gives you choices of how often and which types of violent weather conditions you want to stay on top of. Setup takes all of 5 minutes or less. One of the nice features is the ability to log back into your account later and edit how often and what kind of alerts your receive.

This week we bring you two great gadgets. Meet the Secret Agent lighter from ThinkGeek.com and the French Press Tumbler from TSP Gear Shop. 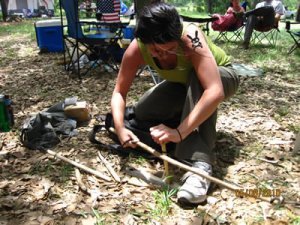 Bow Drill Fire Making is among the most common of primitive fire making skills. Once mastered, it provides an endless supply of one of the basic necessities of life. Without fire you cannot cook food (ok baring you have a bushel of limes lying around in lieu of fire), warm yourself, and in some cases keep predators at bay. It is also one of the single biggest moral boosters whether you are camping or trying to survive in an unfortunate situation.