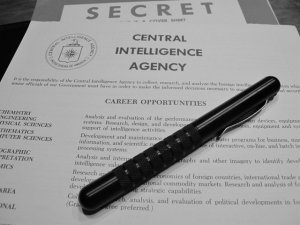 On first impression the The Embassy Tactical Pen is very well constructed. The anodized aluminum is of a good gauge giving the pen some heft. The cross hatched checkering gives the pen a good grip without being overly aggressive and taring up your fingers while you write. The clip is sufficient enough to not easily get bent if the pen gets caught on something. It also comes with a medium black SPR4 pressurized Fisher Space Pen ink cartridge that is good for writing in wet conditions and upside down.

From County Comm about the Pen:

the new Embassy Pen after recently acquiring a small batch from a government contract. This tactical pen is robust and made to last a lifetime; whether it’s on the training field or in the office. A black medium SPR4 pressurized Fisher Space Pen refill, good from -30F to +250F is included. The machined deep knurled grip is made for non-slip use. The built-in 301 grade stainless steel clip provides a secure fit in your front shirt pocket or in your EDC bag. 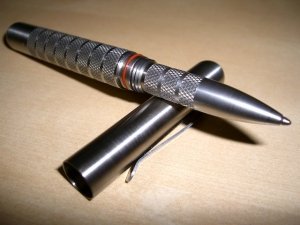 The Embassy Pen is also available in a more snazzy stainless steel version.

The Embassy Pen doesn’t seem to have been designed by someone who really knows anything about pens. For starters, the doggone cap does not attach to the back of the pen. This makes things rather awkward as you go to use the pen for its primary purpose. When you unscrew the cap you are left trying to figure out what to do with it while you write. Great way to lose the cap of your $40 pen. Good pen makers design pens to be properly balanced by placing the cap on the end of the pen while you write. The final thing I noticed about this tactical pen that really irked me was that it regularly comes unscrewed in my pocket. Numerous times I went to pull the pen from my pocket only to pull off just the cap. Besides being annoying, this could be really bad if you are pulling the pen out to use it in a self-defense situation. It would be kind of like drawing a gun only to have the magazine fall out – ooooops.

As a tactical fighting instrument disguised as an innocuous everyday item the Embassy Pen seems like it could really hold its own. It is much less menacing looking that the other fighting pens out on the market. As a good every day pen the Embassy Pen has some really annoying flaws that make me advise folks to pass on it and go with one of the more established brands like Smith & Wesson Tactical Pens, Surefire Tactical Pens, or Benchmade Tactical Pens.

To learn more about using a tactical pen for self-defense and Kubotan techniques checkout these products:

When The Survival Template first arrived on my desk, I was a little put off by…

Review Of Emergency By Neil Strauss

Five years ago, after another Hurricane, I decided it was time to take the safety…