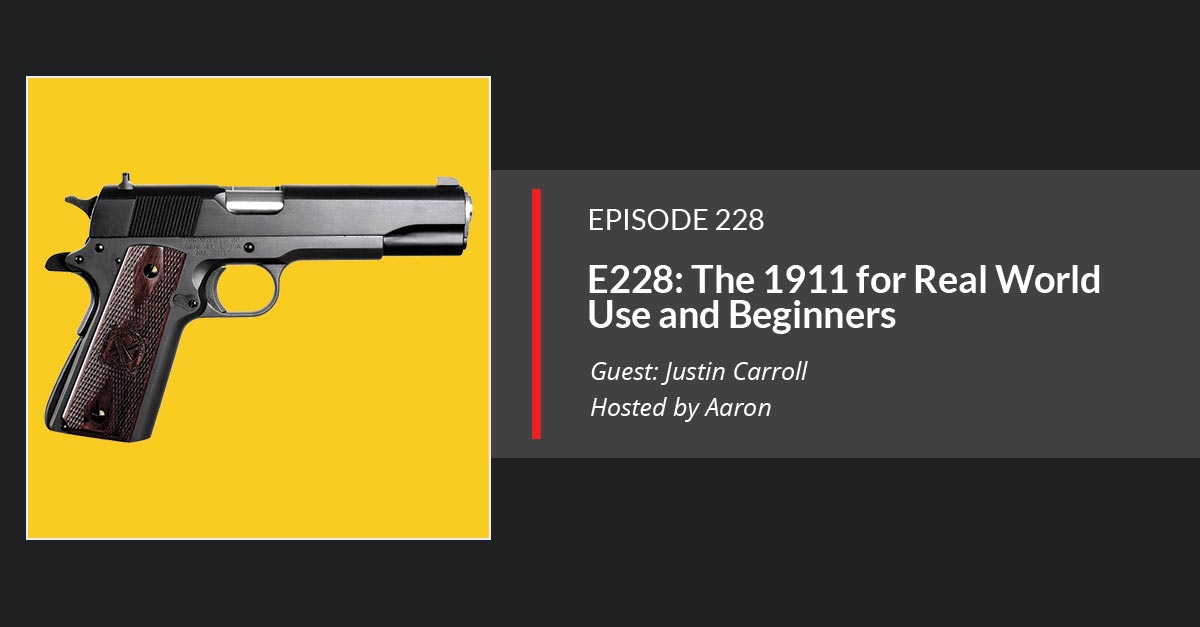 In this episode, Justin Carroll drops back by to talk about the 1911 pistol. The US government paid a LOT of money teaching him to depend on one. And he shares real-world use lessons learned.

For those who don’t know, he’s a former Marine Recon, Marine special operations, and former government alphabet soup guy who ran a 1911 and many other guns for a living.

So Justin has just a wee bit of experience with what works and what doesn’t. And today he’s going to share with us some basics about the reality of depending on one and must have options for neophytes.

The 1911 pistol is a deep part American lore. If you’re a child of the 70’s and 80’s, you probably have at least one grandfather who used one in war. And your dad might have used one in a “conflict” and most likely had a 1911 as his one go-to handgun for home defense. For this reason, many of us lust after them even though we’re converts to the Tupperware warrior guns like the Glock.

But there’s still that lust begging to be satiated. So today we talk all things 1911 so you can decide if it’s right for you and what to look for.

The 1911 For Beginners Topics Discussed:

In this episode, your buddy Mark drops by. We discuss holiday gift buying ideas for the prepper in your house.

E159: How to Choose Camping Gear

Listen in as we sit down with our resident camping gear expert. We'll deep dive to answer all your questions on the best camping tents, sleeping bags, and more. Listen now...

E241: 7 Crazy Ways to Protect Your Identity & Make You Safer

Justin Carrol drops by to discuss several tinfoil hat ways to protect your identity and make you safer for 2018. We cover buying and setting up anonymous phones, cars, mailboxes, and land. And that's just the start.