Set ten years after Humanity’s victor over the Zombies, World War Z is the story told by a journalist for the U.N. Postwar Commission of the Zombie Apocalypse. The individual chapters are composed of first-person interviews in style of Theodore Judson’s Fitzpatrick’s War. Through the piecemeal stories of survivors, author Max Brooks tells the story of how Humanity nearly succumb to the Zombie Plague and how we ultimately defeat them.

As I talked about in Zombie Survival, World War Z was my introduction to Zombie Apocalypse Fiction. Brooks tells a compelling story, while not the most amazing writing, that has you turning the pages and disappointed when it is over. The book is a fairly quick read. The faux interviews give the feeling of capturing a World War Z survivor’s experience. The tales in World War Z are not particularly scary or gory. 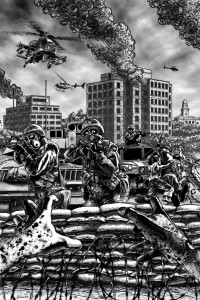 Brooks examines the overwhelming complexities of dealing with an enemy that has no fear, leader, need for supplies, or need for rest. Zombies are the ultimate survival protagonist. How do you fight such an enemy, with staggering numbers, that’s sole purpose in the death and consumption of their foe? This really is the draw of any such novel on Zombie Survival; for me at least. The author does a nice job of introducing and working through all the logistical concerns and at the same time developing the individual character’s and their stories.

World War Z is not just one person’s tale, but instead many. You don’t get just one person’s view, experience, and horror, you get a lot. What you end up with is the apocalyptic survival from quit a few different perspectives. Readers also get the experience of the initial outbreak, the final battles, and the cleanup operations as Humanity struggles to rebuild.

The short vignettes keep the book interesting. With each new chapter comes a new survivor and a whole new story with individual twists turns and often surprises.

There have been numerous complaints that the book had an overbearing sociopolitical message. While I did pickup on hints of this, I did not feel it was to the point that it made World War Z bromidic.

The voice of the survivors often come across as little monotone. Many of the characters felt two-dimensional and lacking their own voice.

Some of the characters are so stereotyped its laughable and they detract from the overall book. They show the authors biases, prejudices, and lack of exposure in a lot instances.

Technical aspects of military strategies and tactics have some real holes in them that had the author consulted more thoroughly with military experts, he could have avoided. That being said, I don’t think most people reading World War Z will catch them.

In spite of some short comings, World War Z is worth the read and I recommend it. I can’t state that you will gleam any useful insight into any survival topics, but if you like apocalyptic fiction you will most likely enjoy the book.

At the time of this post a World War Z Movie is in the works and scheduled to be released July 2012. After a rumored bidding war between Leonardo DeCaprio and Brad Pitt’s Production Company Plan B, Brad Pitt won the rights to produce World War Z and is rumored to be staring in it. Many are saying this will be the first Zombie Major Motion Picture. Hopefully director Marc Forster will take a story with such potential and turn it into an epic movie.

In this video Max Brooks answers several questions about World War Z and zombies in general. Some of his answers are very philosophical while others are more whimsical. Worth a watch.