Just a few months before my 15th birthday I was preparing for a two month long stint at summer camp. What made this year special was that it was my final year as a camper which meant approximately four weeks would be spent backpacking, mountain biking, repelling, and white water rafting across Colorado with 20 some odd other kids my age.

My mother took me down to my favorite outdoor store to pick up the necessary gear I would need for such an extended woodland trek. I had already accumulated quit a collection of gear after six years of going away every summer for two months, but this year I would need stuff that was a little more sturdy. 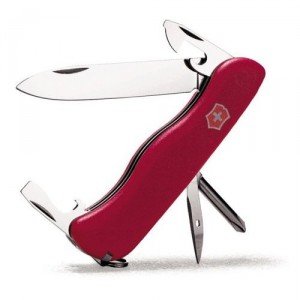 My Maternal Grandfather, a Marine, Judge, and consummate woodsman, always insisted I take a Swiss Army Knife whenever I went camping. So, among the items my mother bought me for the trip was a new Swiss Army Adventurer Pocket Knife.

That knife traveled with me through some of the most memorable moments in my life. It never broke and it never wavered from it’s constant use. Believe it or not, 20 years later, I still own this knife and it still has a special place in my camping backpack. I even have a bit of a superstitious rule that I can’t go camping without it.

Although it could use a good sharpening, it still serves me well to the day when asked to perform a task.

I own many other knives now and most considerably more expensive. However, I always come back to my Adventurer. It’s light weight, in expensive (these days around $40), has just enough tools to be useful and not so many that you spend 5 minutes digging through trying to find the right tool, and is very durable. As an Urban Survivalist, what I most like about it is that it is not intimidating to people who are not accustomed to seeing other people caring a pocket knife, “Oh, it’s just a good ole Swiss Army Knife.”