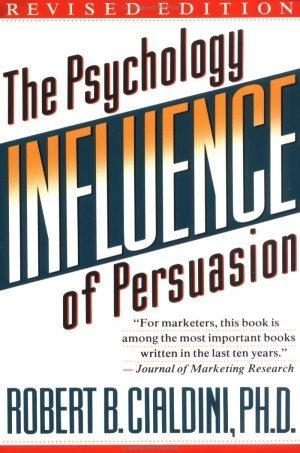 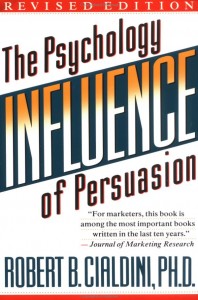 Influence: The Psychology of Persuasion by Robert Cialdini may seem out of place on a site about survival, but that’s only if you do not take into account that people are often your best tool for survival or hindrance in survival. The topic of social dynamics is one far over looked by many survival writers that simultaneously spend volumes of text concerning themselves with people. Using the principles of persuasion ethically and effectively could mean the difference between help from someone or not. It could also mean the difference between being harmed by someone or not.

Much like deescalation techniques, the skill set of persuasion can be a powerful one in your survival tool box.

From the back of the book:

You’ll learn the six universal principles, how to use them to become a skilled persuader-and how to defend yourself against them. Perfect for people in all walks of life, the principles of Influence will move you toward profound personal change and act as a driving force for your success.

Influence first seemed like it was going to be a dry read. However, I was quickly surprised at just how untrue that assumption was. It’s filled with interesting stories told well in a narrative style that illustrate the six principles of persuasion.

Aside form being a pleasure to read, I found Influence to be fascinating. The historical examples brought the aspects of persuasion into clear focus and simultaneously made the book entertaining.

This is a book I highly recommend to anyone interested in being more effective at work, in your personal life, or bettering your survival odds.

I read Influence several years ago, and although I have not had a chance to read it yet-Cialdini’s new book Influence: Science and Practice is probably an exceptional follow-up work.