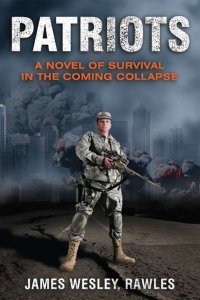 Patriots is a novel by Former U.S. Army intelligence officer and lifelong survivalist James Wesley Rawles. The story has existed in various forms and delivery methods since roughly 1995. It is probably one of the top five most discussed books within the Survivalist Community today. It’s by far the most hotly debated book on the basis of quality, authenticity, and validity.

Patriots is so prevalent within the Prepper and Survivalist Community that I don’t think many will be able to go without reading it. Having heard mixed reviews, it sat on my list of books to read for some time. I passed it up and passed it up, until one day I finally gave in and read it.

Many have described it as one of the best in the genre. Others feel readers would be better served by using the pages as toilet paper. Opinions vary widely and tend to get rather extreme on both ends of the spectrum. My opinion of the book falls just short of, but still firmly on the “toilet paper” end.

A Little History of Patriots

The first iteration of Patriots appeared in the mid-nineties (1995 – 1997) in digital form, under the title The Gray Nineties. The second version of the book, entitled Triple Ought, existed in 1997 through 1998 and was 27 chapters long. The third version, still in digital form, was named TEOTWAWKI (The End Of The World As We Know It). It was published in 1999 and was expanded to 33 chapters. The fourth release, Patriots: Surviving the Coming Collapse, was reduced to 32 chapters and was in print through 2005. The fifth revision of the book, Patriots: Surviving the Coming Collapse (Expanded Edition), was back up to 33 chapters and was in print from 2006 through 2009. The sixth and current edition is Patriots: A Novel of Survival in the Coming Collapse, and is also 33 chapters in length.

Patriots has been made into a screenplay, “Pulling Through”, and Rawles seems to be working diligently to get it to the big screen. He also seems quite convinced that “Pulling Through” just needs to be seen by someone with vision, and has posted it for freedownload so that a wide audience can view it.

What I Liked About Patriots by James Wesley Rawles

The book takes the most believable and highest probability path describing the undoing of the United States of America – socioeconomic meltdown caused by an economic catastrophe. Things being what they are at this exact moment in our history makes Patriots a book that is easy to connect with.

There is a considerable wealth of survival-related items called out in the book, along with interesting ideas here and there for hardening a structure.

What I Disliked About Patriots by James Wesley Rawles

As I read Patriots, I could not stop envisioning that the Taekwondo Instructor from Napoleon Dynamite had written it. That could have simply been from the use of the phrase “Van Damage” (an 80’s Jean Claude Van Damme reference, for those too young to know).

As a how-to book, Patriots focuses primarily on the tactical aspects of survival. Had it contained as much detail in the more practical preparations of the main characters, it would have balanced out and gotten closer to the idea of “a how-to as a novel” that many feel this book is.

Story, plot, and character development are all sacrificed at the expense of volumes of text describing in obsessive detail; weapons selection, gear selection, inventories, tactics, and fortifications. The result leaves the reader feeling as though they had just choked down a technical manual clumsily wrapped in a novel’s skin.

The plot is constantly put on hold to go into painful detail, sometimes for pages, about each and every item. This is especially true when it comes to guns. In most cases a character can’t be mentioned without also detailing what kind of tactical products they have on their person and their selection of weapons. If it is not a core character, the weapons and gear are then typically mocked. Had there actually been explanations as to the aspects of weapons and tools that made them so wonderful (or not), a lesson might have been learned.

Patriots tells several small parallel stories, however the scene cuts are done in a very odd manner that has no consistency. The book is left seeming rather jerky. If Mr. Rawles had developed a rhythm to this, it would have added an interesting element to the story. The method of scene cuts also brings up expectations that all of the stories will converge at some point. Some do and some don’t, leaving readers wondering what the point was, other than to express a far flung view.

The book is of a very dramatic subject matter, yet there is no real dramatic tension that’s ever developed. There are hints of it here and there, but ultimately the resolutions come too quickly and too violently. Not that I take issue with violence, but some well thought out, non-violent resolutions would be a nice mix-up here and there.

By the time I was finished reading the book, I could barely remember anyone’s name. I am not kidding. I set the book down and found it hard to recall any names, the characters were so flat. The main characters of the book never get past being two-dimensional. There are no grey area characters. Either they are good, or bad. They are either a Harley Riding Biker that kills men, rapes women, smokes pot, drinks alcohol, sexually molests little boys, and tortures children, or they are a “God Fearing” “Good Christian” who prays every night after dinner, if not every few minutes and does not have premarital sex or use profanity. Jews are apparently ok though – whew!

Something you should know about Patriots. I asked a lot of people their opinion of the book to test a theory. The theory that held true 99% of the time was this:  If you do not subscribe to Christianity or are not a particularly religious person, the religious aspects of the book will be annoying, if not suffocating. If you do subscribe to Christianity and you are even remotely religious, you are not likely to see anything wrong with the book – except maybe poor writing and editing.

The religious furvor is so rampant and one-sided in Patriots that at some points it is oppressive and at others, laughable. It would be tolerable if the main characters’ moral compasses were not so off. For example, they stop all passers-by at gun point on the road outside of their property, and hold them against their will, question them at length and then only permit them to go about their business once the main characters are satisfied that they are not “criminals”. For an author who is so fond of the Constitution, this is a far departure from our inalienable rights. This defective moral compass would have actually added to the depth and believability of the characters, and perhaps even offered a lesson to be learned, had their short-comings not been played off as just and righteous.

As final notes, the dialogue reminds me of a bad 70’s sitcom: trite, predictable, flat, and childish. There were entire paragraphs I guessed correctly would come next, while reading. There were no surprises. Everything is painfully predictable. Also, the editing is atrocious. Patriots was originally released in 1995 and has been updated repeatedly. Given the number of inconsistencies, skewed timelines and glaring historical mistakes, the books seems as if no one ever bothered to edit the rewrites.