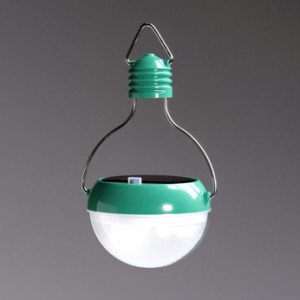 Friday Gear Report: 6/24/11 brought you the Nokero N200; the second in a line of solar light bulb products from Nokero. Where the original Nokero N100 left me underwhelmed, the N200 picked up the slack.

The Nokero N200 features a three-position switch allowing the user to choose from: off, low output, and high output. On its low setting the N200 delivers up to 6 hours of light. The low setting provides a perfect amount of light for general activities that require a minimal amount of light. On its high setting the N200 puts out up to 2.5 hours of light. The high setting gives off a very descent level of light for tasks – or eyes – that need to see more detail.The second point at witch the N100 and N200 diverge is in the solar panel. The N200 utilizes a single large solar panel that can be easily positioned to capture and consume lots of light. This improved design allows the N200 to absorb more light at a faster rate. Given how slow solar panels are to begin with, the faster charge times were a huge improvement.

Construction of the N200 is very similar to the N100. The polycarbonate body can take a reasonable amount of abuse. Repeatedly dropping the N200 from a high of 8 – 10 feet did little to damage it excluding some cosmetic scuffs. The domed lens did pop off several times, but was very easy to screw back on without issue.

The N200 preformed as well as the N100 in extreme heat and cold. Sticking it in a deep freezer for three days produced no ill effects. Leaving it out in the 105 degree Texas heat for several days also did not diminish the N200 capabilities.

Only one thing stood out to diminish the N200, the clip. This is the same clip that I found sub par on the N100. It’s flimsy and rusts. However, it can easily be removed and replaced by a lightweight carabiner found for a dollar at every outdoors and home improvement store.

For $5 more – $20 – Nokero has hit the mark with its release of the Nokero N200 Solar Light. It’s perfect for camping and extended power outages.

Set ten years after Humanity's victor over the Zombies, World War Z is the story…