How To Build a Rabbit Hutch 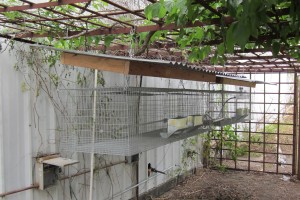 Nearly 8 months ago I embarked on an urban self sufficiency project. While the last few months have been rather quiet, the start was busy. Among the first tasks Jason McConniel and I tackled was building a suspended rabbit hutch complete with automatic watering system.

Using a modified version of the plans from Storey’s Guid to Raising Rabbits, we spent a weekend building our first set of rabbit hunches. The entire process was filmed in hopes of producing a How To video, but unfortunately the audio came out so bad it was never released. In a couple of weeks we will be building another set and refilming the process.

In the mean time, in an article titled Building a Rabbit Hutch for Save Our Skills I laid out the full process, diagrams, and materials involved in our first attempt.