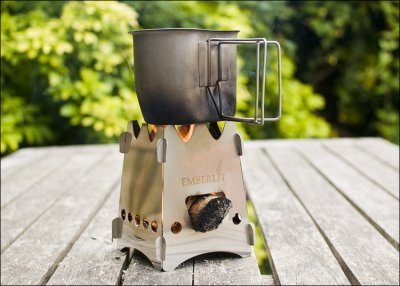 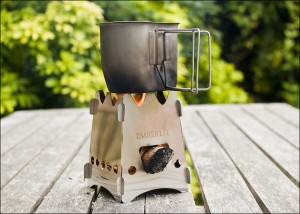 Wood burning camping stoves usually don’t produce a lot of exciting news. However, a reader recently submitted a new piece of gear I had to share.

Exquisite form meets exceptional functionality in the Emberlit Stove ($35 Steel – $55 Titanium). Powered by wood or other biomass readily available, the Emberlit camping/backpacking stove is a big improvement over traditional folding stoves of this type. What makes it so special is the fuel port on one side. Most other stoves of this type have no way to easily feed fuel once the fire is lit and is being cooked causing a “yoyo effect” on cooking temperature. Not to mention the irritation of having to remove your pot form the top to add fuel.

There is even a heart warming story attached to the stove. The Emberlit Stove may look like it was designed by one of the big camping companies, but it’s actually a small business owner who hopes, “To just make enough money so his wife does not have to work at Walmart anymore.” After speaking with the inventor/owner/operator Mikhail, I get the since that this is someone who really has his heart in his company and his product.

The Emberlit Camp Stove is a lightweight, compact, wood burning stove that doesn’t require you carry any fuel. It packs completely flat at about 1/8th in thick, weighs only 11.3 oz, and is 100% Made here in the USA from stainless steel. The new Emberlit-UL is made of titanium, in the USA, and weighs a mere 5.45 oz

What sets this stove apart from others is its ease of use. Properly fed, the Emberlit Stove requires minimal effort to produce and maintain an even flame with little or no smoke. This means that instead of fidgeting with the stove you can focus on cooking. Since the Emberlit makes much more efficient use of fuel than an open camp fire, a couple handfulls of twigs and sticks gathered on the trail is more than enough to boil water and cook a full meal.

Get the Emberlit Stove in steel here

Get the Emberlit Stove in ultra-lightweight titanium here

Thanks for the gear lead Norris.

Want a gasification generator but don't have the time to build one? You're in luck. (Not so lucky for your wallet.) Read on...

It's in your car! Now that we have that settled, let's move on to the…