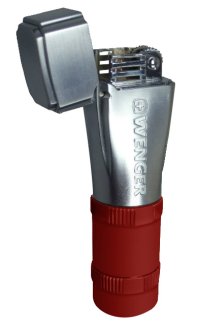 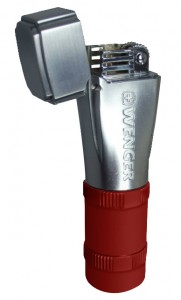 Butane lighters–such as the Windmill Stormproof Butane Lighter–are great. But like 1911s, there is the intrinsically appealing nostalgia of good ole flint and wick lighter.

The classic Zippo is not the best for a survival situation (I still carry a Brass Zippo Armor everyday). However, Wegner (makers of the Swiss Army Knife) has come out with something a little better suited for those treks into the bush.

Meet the Wenger Fidis Camping Lighter, a flint and wheel lighter with special compartments added to store extra fuel and flints. Seasoned Zippo carriers have long kept extra flints under their cotton. But there is something nice about a separate compartment. And something really nice about being able to carry extra fuel without having to wag around a separate fuel canister.

From Wenger on the Fidis Camping Lighter:

Fidis distinguishes itself as a lighter with something extra…a spare fuel tank. The lighter is essentially three parts, a conventional flint and wick lighter, a unique backup fuel tank is connected to the body of the lighter, and a spare compartment where the extra flints are located in the bottom cap. It’s so reliable that it carries its own separately sealed spare fluid reservoir for use when the main compartment eventually evaporates or gets used up. The accessories: flint, burning wick and fuel are easily replaced.

Key Chain EDC tools are like crack in the survival and tactical worlds. Among the…

Meet the Rokon Trail-Breaker, a 2-wheel drive motorcycle that will go places you may not even…