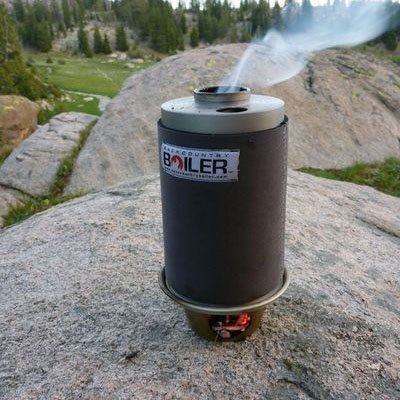 I know, I know–I’ve been bad. The Friday Gear Reports fell off for a while. And many of you have not been shy about telling me this MUST come back. But I think today’s will make up for that. Not only is it a cool idea, but it’s also being brought to market in an awesome way!

So without further adieu…

Meet the Backcountry Boiler by Devin Montgomery. It’s a simple way to boil water while out in the woods. Best of all, it uses a fuel that is abundant and free–wood or any found fuel.

A blur from the inventor:

Over the past few years, I’ve spent a lot of time developing the Backcountry Boiler and here’s why: it represents an utterly sensible way to make hot meals and drinks in the outdoors. As opposed to complicated contraptions that run on fossil fuels, it’s simple, light, and operates on the fuels we find around us every day: paper, cardboard, pine cones, sticks. It also brings back the joy of a natural fire in a way that is much more responsible than having an open campfire.

Another cool thing about the Backcountry Boiler is that it is a Kicker Starter project. For those unfamiliar with Kick Starter, it’s a really cool way to get those brilliant ideas for a gadget, gizmo, or widget off the ground. In their own words, “We’re the world’s largets funding platform for creative projects.” You put up your idea and people on the site pledge money for the project. When you get to the needed goal your golden. For more info checkout their FAQ page.

Best of luck, Devin. Although from the pledges, doesn’t look like you’ll need it!

Think you have seen it all in survival foods? Think again and get ready for…

Ares Ranger belts may just be the best on the market for the serious gear connoisseur. Hold up your pants and provide a solid platform for your gun. Read on...

Recently I made a big change: I moved away from leather holsters in favor of…