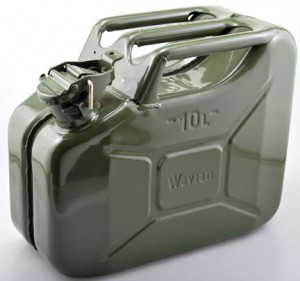 Most gas cans on the market today a cheap, leaking, plastic doldrums. Often, the gas station variety end up spilling just as much gas on your shoes as they get into your tank as the crappy nozzle slips back just enough to break the seal. Worse yet, you have to fool with taking the gas soaked nozzle off, turning it around, and sticking it back inside the can after your done.

Surplus NATO Jerry cans offer a well designed mil spec alternative, but their condition can be plagued with years of use and abuse that isn’t always easy to discern at first. As an alternative, for the last few years I have been using the Justrite gas cans.

Recently, Deutshe Optik partnered with a NATO contractor to reintroduce a 5, 10, and 20-liter Jerry can. I was pretty excited to see a manufacturer bring newly made Jerry Cans to market as even getting used one can be a little tricky these days.

So far they have been received very well and people are saying the seal great and are as rugged as they look. Best of all, Deutche is currently running a sale if you buy four of the 20 L models – free shipping!

Two things people don’t give enough thought to protecting: Eyes and hands. Today, were going to talk about gloves. Read on...

This week we bring you the SportChassis P4XL. A truck for your next Armageddon adventure - or for soccer…

Think knives need to be made of metal or ceramics? Guess again... Meet the Carbon…