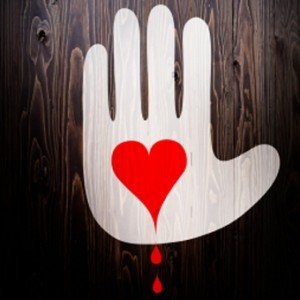 I was going to be a good EMT and not write my first post for the Rabbit Hole about blood and gore, but I couldn’t help myself.

Bleeding to death can kill someone faster than anything else. We talk about 4 minute response times for heart attacks1, but if you have serious bleeding from an artery you will be “dead dead”2 in way less time than that.

Put Pressure On It

The first thing to do with any bleeding, from a pinprick to stuff rhythmically spurting from your thigh, is to apply pressure. Generally we’d like to put a bandage on it when we apply pressure, but if you don’t have one in your hand, just use your hand. Actually your gloved hand, remember “if it is wet and sticky and not yours, don’t touch it”.

Our goal is to hold uninterrupted pressure for at least 5 minutes. This will stop blood flowing and allow time for a clot to form.

If there is an impaled object, leave it in place and apply pressure as best your can.

Not quite a medical myth, but we no longer worry about elevating the extremity or putting pressure on a pressure point to try and stop bleeding. This is a recent change, but they found those things just don’t work that well or make that much difference and we should really be moving right to a tourniquet.

BTW, the medical equivalent of the “clip vs. magazine” debate is “bandage vs. dressing”. A bandage is what you put right on the wound and apply pressure to. Normally some form of gauze. A dressing is how you hold a bandage in place. It too can be gauze wrap, or cloth, or duct tape. It doesn’t really matter as long as it holds it in place.

I talked about tourniquets extensively on the podcast, but they are now standard of care in EMS and trauma medicine. If you have bleeding in an extremity – an arm or leg – put on a tourniquet.

Apply a tourniquet proximal to the bleeding. This means 1-2 inches upstream from the wound. You don’t want it so close it pulls on the wound, but you don’t want to go further away than you have to.

Put it on and crank it down until bleeding stops. There isn’t a magic pressure you are using, just turn it until the bleeding stops. Dedicated tourniquets have a means of locking the wing lass into place, use it. If you are improvising a tourniquet, secure it so it won’t come undone. Note the time you applied the tourniquet. If you want to be real cool write “TK” and the time on the tourniquet.

Make sure you continue to monitor the bleeding and tourniquet. We’ll talk in a minute about good tourniquets, but nothing is perfect and they can come loose. If you see the blood pattern on your bandage change, or blood starts leaking out, your tourniquet is no longer working. Retighten it.

Once you put on a tourniquet don’t take it off. Don’t loosen it every few minutes. Just leave it alone. If you loosen it all you are doing is causing them to bleed again. Extremities can take a lack of blood flow for hours. In Baghdad the Army had 232 patients with tourniquets on 309 limbs and had no amputations and only 3% of those even had nerve damage. See Dr Holcomb’s lecture for way more details.

Did you notice the Army treated less patients than they had limbs tourniqueted? That is because some people got multiple tourniquets. Here is an example of multiple tourniquets in a civilian case. Shooting accident at the range and guy is shot by the person next to him. The bullet goes through one leg and then the other. Someone had a tourniquet but only one so they had to improvise. Remember One is None, Two is One.

Are All Tourniquets Created Equal?

No. There are a bunch of studies done comparing different tourniquets. I could go through all of them, but I’m going to cut to the chase. The 2 that work are the CAT and the SOFTT.

The SOFTT works at least 75% of the time. I find it a little more complicated than the CAT.

We mentioned on the podcast QuikClot, which is a hemostatic agent. This means applying it to a would will aid clotting. It does a few things like ionically attracting red blood cells, but mostly works by removing water from the wound.

On the podcast I threw around the term “exothermic reaction” a lot. That’s just a fancy term that means a chemical reaction that gets hot. These clotting agents react with water quickly and cause it to get hot. This can be a problem for you if you get them on your sweaty skin or, worse, in your eyes. So don’t buy the QuikClot powder, if you can find it. Instead buy QuikClot infused bandages.

No treatment is without pluses and minuses. We were inventorying the ambulance one morning and I asked my In Charge Paramedic when we would use the QuikClot bandages. He said, “On a battlefield. If you are going to get them to a hospital quickly they do more harm than good.”

It is important to remember that the real treatment for bleeding and trauma is surgery. So you don’t want to go throwing hemostatic agents on every wound. Only the ones where it is necessary to stop the bleeding.

Since I don’t happen to work with an agency that sees a lot of battlefields, I wondered why carried it at all. I wrote an email to my medical director and asked him. His answer was, use it on non-compressible non-extremity major bleeding. “Typically, it would be a wound where a regular dressing has soaked through or would most likely soak through or has arterial bleeding.” If the bleeding is on an extremity, use a tourniquet to control it. But if it is on the neck, chest or head, you can’t really use a tourniquet.

Which is a good place to stop and review. If you have bleeding:

1. Apply direct pressure.
2. If that doesn’t work, apply a tourniquet.
3. If you can’t apply a tourniquet and they are soaking through regular bandages, use a bandage with a hemostatic agent like QuickClot in it.

1 You really don’t need an ambulance in under 4 minutes for a cardiac arrest, you need CPR started in under 4 minutes. So learn CPR, you are the response.
2 In EMS people without a heart beat are dead. But we can sometimes raise the dead. When you get to the point we can’t save you, you are “dead dead”.

Ron is an EMT-I in Texas and co-host of the EMS Podcast Confessions of an EMS Newbie, where he and his paramedic guru discuss what he's learning in paramedic school every week.

He's also the co-host of the Photographer and Model Podcast, where he interviews photographers and models.

A couple of years ago, after reading Emergency by Neil Strauss, four friends and I…

The following two-part article considers the procurement of reptiles, in this case snakes, for sustenance. …

Para-cord bracelets are pretty popular in the survival community. Safe to say, they are one…