I admit it, I am a gear geek. No matter how much I preach about skills, I still love gadgets, gizmos, and whatsihoozits. When it comes to flashlights, I have loved them since I was a kid. The Streamlight Sidewinder Tactical Flashlight is the most interesting flashlights I own.

It’s not a cheap flashlight at a suggested retail price of $94 (you can find them most places for under $60), but when you need a flashlight that will stand up to abuse and all your needs the price tag is not that bad. After examining it, you can tell Streamlight put a lot of thought into the design and construction.

Sidewinder® “” This flashlight has been engineered to meet a variety of hands free task illumination requirements with C4® LED and various color LEDs operable at varying outputs and runtimes. The flashlight features a 185Ëš tilting head and belt or web clip to allow positioning of the illumination source at the work area. 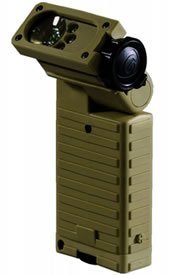 What I Liked About The Sidewinder

The tiling head is great. It allows the flashlight to be clipped to a pocket or MOLLE strap on a backpack, tilt the head down, and free up your hands.

The multiple illumination sources are handy. I have not needed the IR or the blue, but red (prevents night blindness) I have used a couple of times.

The belt clip can be secured to either side of the Sidewinder. Since the head tilts 180 degrees, being able to move the belt clip from one side to the other allows it to be customizable to the user’s hand dominance.

The IR indicator on the source selection knob. This indicator on the knob gives you a quick reference to know if you have left the flashlight in IR mode or not. Why is this important? Since we can’t see in the infrared spectrum, it’s easy to leave the light on and kill the batteries. Also, for soldiers, you can give you position away unknowingly by forgetting the IR light on.

The overall construction of the Streamlight Sidewinder is very rugged and well-built. It looks and feels like it could take a real beating and never skip a beat.

The battery compartment cap is tethered with aircraft cable (braided steel cable) from the inside. Caps for anything seem to just want to fly off and go hide which is always a pain. On a flashlight, loosing the cap can be a disaster. The cable does a great job of keeping the cap from getting lost while you change batteries. Steamlight gave it the added touch of putting this cable on the inside which keeps it from snagging on anything.

While the overall design is very functional and easy to use, I did have a couple of issues with the operation of the light. Ok, not a couple, just one ““ the on/off button. To raise the light output you have to hold the button down. It’s not Earth shattering, but it bugged me. I much prefer the Surefire switch function of tapping the button multiple times to scroll through the power outputs. The Sidewinder does have a multi-tap function, but it is for a signal light. This isn’t a deal killer for me, just an annoyance. Most other people probably would not care.

Great features aside, my personal favorite for day-to-day use in the Urban Jungle is still the Surefire E1L Outdoorsman. It is about a 1/3 the size, is easier to operate, and puts out a much brighter beam of light. For military or camping use though, this is a great light and I would be more likely to reach for it than my Surefire E1L.

There is a compact version dubbed the Sidewinder Compact selling for between $49 ““ $75, but I have not played with it yet. I am sure I will pick up on in the near future though.

Meet the JakPak, a Jacket with multiple personalities disorder. JakPak is one of the most…

Satalite communication based emergency beacons have been with us for a few years now. A…

For the James Bond in you, Sparrows' Uncuff Link gives class to your escape. Lock…