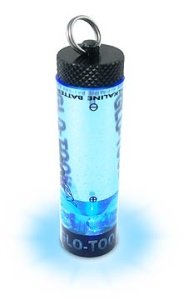 Chemical Light-sticks have long since been the tool of rescue workers, military, and hikers. It may be time to upgrade from those old-fashioned chemical light sticks though.

Initially designed by the creators to replace Light-sticks in night and cave diving, Glo-Toob offers a brighter and longer lasting alternative. Driven by LEDs and built like a little tank, Glo-toobs offer some rather impressive advantages.

Operating for approximately 24 hours in a permanently on condition with a recharge battery and approximately 40 hour with a non-recharge battery, the Glo-Toob is perfectly suited for any dark environment whither it be camping trips or military use. With its inexpensive, replaceable battery and high impact resistant design, the long-lasting LED lights source wis viable from 360 degrees.

The compact lightweight Glo-Toob is easy to attach to your equipment by means of its stainless steel split ring or detachable lanyard. The Glo-toob with its 11 modes and waterproof capabilities can be used in almost any application.

Glo-toob comes in five colors: Red, Blue, Green, Amber, and Clear. You can also choose between alkaline and lithium models. They even have an infrared model for those that like to play with night vision.

line of lights could be that answer to a signal beacon your BOB has been asking for.

This weeks Friday Gear Report was suggested by Rugrash – thanks for the tip bro.

Think your iPad just isn't feeling the Tacitcool love? Your wait may be over. Meet…

Kitanica, "Exoskeletons for Humans", manufacturers some of the most rugged and interesting  jackets and pants on…