Bear Grylls, some love him and some really hate him. I am not a fan of his show. I have nothing against Grylls – he has my respect for a number of reasons. I just don’t like the show. However, he often does has cool gear. 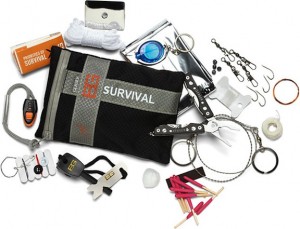 Over the last couple of years Bear Grylls has taken advantage of his show’s success and launched his own product line. It features hats, gloves, trousers (I actually want a pair for some reason), jackets, t-shirts, and the like. Gerber has also partnered with Bear and come out with a line of knives and such bearing his name. The most recent addition to the line is a Survival Kit for $50.

For the casual hiker/camper who is not going to invest the time to understand each item and hand select each item I totally get the appeal. You hand over your cash to a store and they hand you back what is presumably everything you would need in a survival situation – within reason – and an army of lawyers behind the warnings.

There are a couple inherent problems with prepackaged survival kit though. First, the purchaser is unlikely to ever open the kit and actually go through the items at any point after they buy it much less check it every time before an outing. Second, the manufacturer had cost in mind with every single item in the kit – even down to the fish hooks.

They are not being mean or greedy. They know what most people are willing to spend, what components are needed, and at what profit margin it’s worth it to them to bring it to market.

Caveats To My Concern

Something is always better than nothing. If you have neither the time nor the interest in piecing together a kit, then by all means go bananas. I would rather you have something than nothing.

Having never looked over any premade BOBs in person – I have made all my own – I can’t speak to their general quality. This is only for person survival kits.

Friday “Stuff” had to take a break for a while, but now it’s BACK! I have been working on a project – look for announcement in the next month – that the Author of Emergency, Neil Strauss, asked me to be part of. Producing the ITRH Urban Survival Podcast and up coming videos has also been a learning experience and consumed a lot fo time.

Most gas cans on the market today a cheap, leaking, plastic doldrums. Often, the gas…

Think you have seen it all in survival foods? Think again and get ready for…

Kobold has carved out a niche in recent years by building beautifully designed rugged watches.…