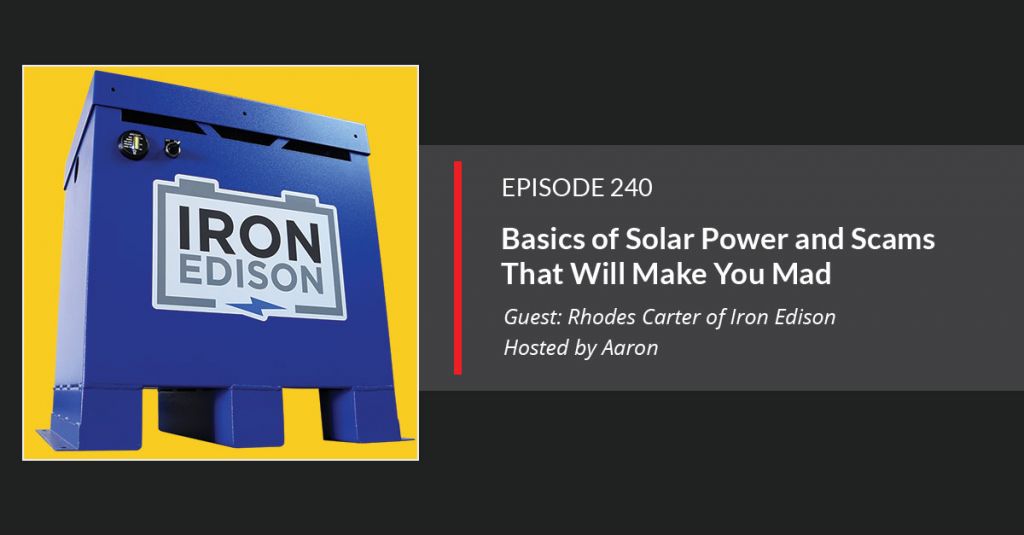 Rhodes Carter of Iron Edison stops by to discuss the basics of solar power. We cover everything you need to know to start your journey and one big scam you should avoid.

Alternative energy is all the rage these days. Buring the liquified or charred remains of dead dinosaurs is so last century.

Preppers have wished upon a star to give them energy production for a long time now. The reason was simple: We want energy independence and self-sufficiency! And it’s just about the only way we’re going to power our BOL when the zombies march, right? (OK… there’s that cold fusion reactor, but that’s not happening tomorrow.)

Solar power simply wasn’t realistically a viable option for the last few decades, sadly. The equipment to build a system to juice up our power hungry lives was too expensive. The efficiency didn’t make sense. And it didn’t produce enough electricity to meet the demands of most people.

However, things are rapidly changing in the world of solar power. And we may be at the point where this type of alternative energy production verges on what most people hoped it would grow into.

But figuring out the different types of systems and what you need is as confusing as a football bat. You’ll need to figure out your loads, wire sizes, volts, watts, amp hours, batteries, battery chemistry, panel sizes, and on, and on.

The worst part is most of the information reads like drunk engineers hastily wrote it. (English may also be a second language just to make things more exciting.)

Fortunately, Rhodes joins us to give us a primer and promise to take us all the way…

Tune in for the final episode and hear Aaron interviewed by a listener.

Hosts Aaron and Jonathan are joined by Ron Davis for a discussion on the basic items needed for a three week bug in period.