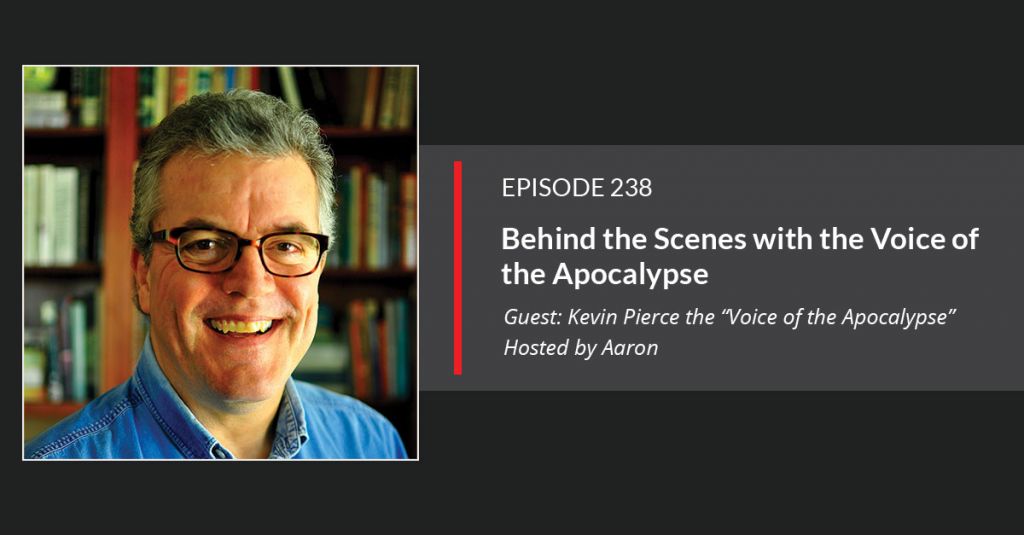 In this episode, we sit down with voice-over artist Kevin Pierce aka the “Voice of the Apocalypse.” He shares with us how he got started in the business of book narration and eventually became the voice reading most of our favorite post-apocalyptic prepper fiction books to use.

Hiding deep in the bowls of dystopian fiction is something special, terrifying, titling, and even insightful: Prepper fiction. Some say this all started with the book Alas, Babylon. Others say it goes further back to the book Earth Abides. Then the genre slumbered for nearly 60-years only stirring occasionally as the decades rolled on.

And finally, the match was lit; prepper fiction exploded. Rather than waiting for a decade or two between great stories, we’re now on to the next book as soon as we finish the last.

Sometimes we’re attacked by Zombies. Other times we’re stricken with a sweeping pandemic. Often, we’re taken back to the stone age by an EMP.

Whatever your prepper jam, there seems to be one voice tickling your eardrums in most of the audiobook versions of these books. Its a voice so ubiquitous in the genre your mind is immediately transported as though you’ve just heard some deeply embedded NLP command.

You might know this voice by the name of Kevin Pierce, or you might know him as the Voice of the Apocalypse. You know the sound of his voice well, either way.

But most of us do not know the man behind the voice. Who is he? How did he get his start? And how did he come to be the Voice of the Apocalypse?

Kevin Pierce on Being the Voice of the Apocalypse:

In this episode, we sit down with Jeanna Cournoyer to discuss self-defense and firearms training. Jeanna is a bit like a female John Wick with a long resume of training in Krav Maga, firearms, and stress training. Listen now...

Join us for the first official episode! Today we discuss Knee Jerk reactions. Recent events have, unfortunately, leant themselves to a discussion on how being reactionary is bad for the country and in prepping.

In this episode we get an officer's view of Ferguson, police militarization, get sprayed in the face with pepper spray by our friends, fight the war on drugs, and discuss tactical man boobs.