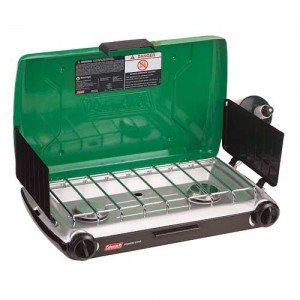 After five plus years of use, my Coleman PerfectFlow 2-Burner Stove has held together through numerous camping trips, car trips, and Project Appleseed shoots ““ but it’s not without its short-comings.

The fuel is relatively cheap. At roughly $6 a can, and lasting 3 days per can cooking three meals a day, I have found the fuel costs and usage to be acceptable. There are numerous reviews online of people’s Coleman 2-Burner (non instant-start model) using propane inefficiently. This seems to be a hit or miss issue.

The stove features a heavy-duty nickel chrome grate that’s rust-resistant and easy to remove and clean. Although, it gives a good rattle as you drive.

Side wings – or the “built-in WindBlock System” as Coleman calls it –  on the stove look like they should keep the wind off your flames, but not so much. This is not to say that they are an epic fail, but they are short of adequately designed for the job. Even in moderate winds I have found the stove greatly affected by the wind. This leads to greater cook times and propane expenditure.

A strange issue my Coleman PerfectFlow 2-Burner Stove started experiencing around its second outing was that randomly the flames would go to full blast as if I had turned the knobs to full. I would shrug and adjust them. Then after a few minutes, the stove would return to its previous pressure, reducing the flame from almost nothing to extinguished. Not what one might consider a “Perfect Flow”.

Coleman promotes the stove as good for many activities including backpacking, but at 12 lbs and measuring 21″³L X 12.8″³W X 4.25″³H, that’s a stretch. I would hardly say it fits what most backpackers would want to stuff in their rucks. For car camping, bugging out, and bugging in, the stove is a good size.

If you are looking at two burner propane camping stoves, my suggestion would be to pass this one up completely. At this time I do not have one to recommend. Although, some of the more recent Coleman PerfectFlow Stoves tend to get good reviews.

Have an experience with a camping stove you like? Leave it in the comments below.

Influence: The Psychology of Persuasion by Robert Cialdini may seem out of place on a site…

The Colony premiers this July on the Discovery Channel. Personally, I have mixed feelings about…