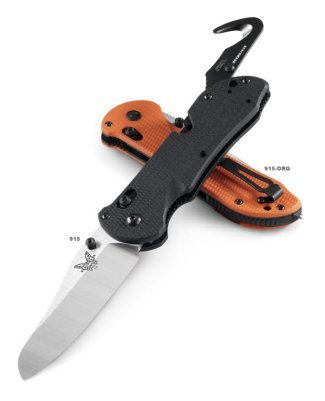 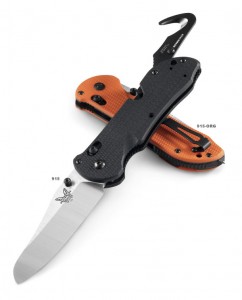 The Benchmade Triage 915 is a well designed knife for emergency responders and people looking for a good EDC Knife that is not Tacticool. However, it has its imperfections.

Tactical pocket folding knives are great for, well tactical applications. But, for the 99% of us who are probably never going to be in a force-on-force encounter involving knives, there seem to be few choices these days.

For many years I have carried and really enjoyed my Ken Onion Tactical Blur Tanto point folding knife, made by Kershaw. However, I am more likely to need a knife for opening boxes, cutting rope, or freeing myself from a seat belt after a car wreck than I am for fighting (let’s hope).

For my next EDC knife, I decided it needed to be something less aggressive-looking and more applicable to the activities I engage in everyday. It should also fit the more likely emergency issues I may encounter.

The sheepsfoot-style blade is perfect for slicing and cutting without concern of stabbing anything on the other end. They are popular among rescue workers, as this blade shape can easily be slipped under a seat belt and other restraints without fear of injuring the person they are trying to free. Among sailors, the blade shape is favored for similar reasons ““ on unsure footing you are less likely to stab yourself or your sails.

There are a couple of knife makers, each with variations, that make a sheepsfoot folder. The one that caught my eye as being the most well thought out was the Benchmade 915 Triage.

When my new 915 Triage arrived I was a little disappointed. The design and function is awesome, but some things just weren’t right.

The first thing I noticed was that the odd pattern on the G-10 scales makes the knife look kind of cheap. Rather than going with a traditional cloth pattern, Benchmade used a strange bumpy raised pattern. It has no effect on grip, but it just makes a relatively higher end folder look cheap.

The second thing I noticed was how big the blade is. I did read the specs before buying and knew what I was in for, but the overall design seemed to make up for the excessive size. In my opinion, 3.5″ is .5″ in excess for an EDC folding knife. Over the weekend I showed the knife to Ron Davis, and he gave a head scratch at the sight of the blade’s length.

The third thing I noticed ““ most important ““ was that the blade was dull. When you pay more than $100 for a knife, you expect it to come with a proper angle and a damn good edge. The edge was so bad, Benchmade might as well have sent it out flat. It was sharpened like an Axe or other chopping tool with a very shallow angle. I was not alone in this experience. Every review I read before I bought the Triage complained about this. I had hoped Benchmade had corrected it, but apparently not. Benchmade should be truly embarrassed sending out a knife I can run my thumb over and not cut.

Fourth, the safety cutter does not lock back. When opened it sounds like it locks back with a click, but no such luck. Does it need to lock back? No. The bottom inside of the safety cutter has jibbing for your thumb. With your thumb firmly in place, the safety cutter is not likely to go anywhere. However, I still say charge me a little more and put a lock on it. It would make me feel better.

Lastly, the assisted open is weak. I am used to the speed safe on Kershaw knives. You barely touch the things and their blade is in the game. The Benchmade 915 Triage takes a little more effort.

What I did like about the 915 Triage, as I mentioned before, was the thought that went into the design of the knife.

On all the other knives I looked at that had a safety cutter, it was built into the handle and exposed. Putting an exposed sharp edge in my pocket just seems like a recipe for damaging something. The cutter on the 915 Triage folds neatly back into the handle like any other blade.

Several fixed blade knives on the market have glass breakers on the butt of the handle. This is the only fold I came across that had a dedicated glass breaker. I may only ever use this feature once in my life, but it will be that one time that I need it that will make it worthwhile.

The modified Sheepsfoot blade is a very interesting design. It has more of a belly than a proper Sheepsfoot, giving it more versatility in function.

After I changed the angle from a 30 to a 15 and put a polished edge on it, I find it to be great knife that will remain my EDC for some time to come. Get your Benchmade Triage 915 here.

Many readers call Storey's Guide to Raising Rabbits "the best rabbit book ever!". But, why?…

A review of Ragnar's Urban Survival book: The good, the bad, and the ugly. This book contains good tips, but there's definitely issues. Read on...