The euphemism of Zombies makes having a conversation a little easier. It’s far easier to say, “When the Zombies come” and sound like a dork than it is to say, “When X happens” and sound like a tinfoil hat-wearing nut. We can hypothesize about it, play with it, and it’s all in good fun. Hypothesizing about real-world issues that can arise is far more daunting. You remove the emotion from the conversation when you’re talking euphemistically.

Zombie Fiction gives modern Preppers the opportunity to get close to their concerns without touching them outright. It’s one thing to read a horrific story about Zombies taking over the earth and humanity wrapped in a battle for our very existence. It is quite another to read a story about the collapse of a country and its citizens wrapped in a battle for their very existence. When you close the Zombie book, the fight is over or at least paused. It’s easy to say, “That could never happen” and dismiss the story enough to rest easy. This is much harder to do when the story is closer to home. In the end, Zombie Fiction allows its readers to journey through a hypothetical sequence of events without the worry of getting consumed by them.

Zombies have been part of folklore for some time.

Jewish Hasidic and mystics have had Golem as a part of their legends for a little over 1,000 years. Zombies have also been more famously, a part of West African and Caribbean Voodoo for an indeterminate amount of time. The interesting thing about Zombies in both instances is that their creation is extremely similar, yet they bear little resemblance to contemporary Zombies that started with Romero’s Night Of The Living Dead circa 1968.

Ok, really, do I need to answer this?

Zombies are not real…

…Perhaps in some kind of screwed-up, genetically modified virus gone Will-Smith-wrong, perhaps they could happen. Aside from what could conceivably happen, it has not happened yet, or at least there is no proof that Zombies exist. I just want to get this out of the way now before someone makes this out to be in any way, me believing in Zombies, and thinks I have lost my doggone mind.

So, are Zombies real?

When I first warmed up to the idea that I needed to do so something to take more personal responsibility for the safety and well being of myself and my loved ones, I searched high and low. Someone had to have written an Encyclopedia of Survival or maybe even a single book that was the be all and end all, to guide you through everything you could come up against.

As far as “ultimate” survival guides, I have never found one. Instead, I have found a laundry list of books that offer ideas, techniques, and information that are applicable, both generally and in specifics. You just have to read and read some more.

How To Survive A Zombie Attack

Surviving a Zombie attack in most ways relates directly to surviving an attack from a human aggressor. Quick wit, quick feet, and excellent skills with your hands and/or the weapons of your choice, are your best hope.

The real trick to surviving a Zombie attack is in understanding your opponent. Questions you have to know the answers to are: What are their strengths, what are their weaknesses, how do my strengths and weaknesses compare and contrast with a Zombie’s?

Would you survive a Zombie attack?

How To Survive A Zombie Apocalypse 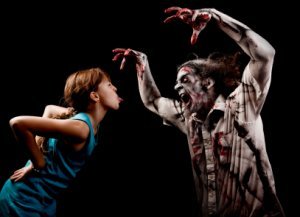 Zombie Apocalypse Survival is yet another great example of perfect parallels. In examining Zombie Apocalypse Survival, you find that all the same principles apply; have a plan, have supplies, have skills and above all else, have the right attitude. Put skills at the top of your list. With skills, you can always make or get supplies. With the right attitude, you can survive nearly anything. Without it, nothing else matters, as you simply lack the will to survive. Attitude, or mental state, is a topic I have found to be emphasized in every reputable book on survival.

Would you survive a Zombie Apocalypse?

There are several classifications of Survival Kits.  A Zombie Survival Kit is more of a repertoire of kits rather than a single kit. There are Blackout Kits, BOBs, and EDC Bags.

Leaving your home is not always the best option. Blackout Kits are your Zombie Survival Kit for “Bugging In”. More often than not, staying put is the answer. Staying in place has a multitude of advantages including; tactical, the ability to store Zombie Survival supplies, and comfort. A Blackout Kit should contain all of the necessary items, in a convenient location, needed to ride out the issue that keeps you in place.

Bug Out Bags, commonly referred to as BOBs, are bags or kits that contain essential items for leaving your home in the most expedient manner possible. However, there is another use for BOBs. They can also be taken with you everywhere you go or kept in a vehicle and classified as Get Home Bags. Zombie Survival Kits contain the same items but are meant to get you home from wherever you are rather than take you from home to wherever you need to go. The typical time requirement placed on a BOB is that it should be able to get you through 72 hours of survival.

Everyday Carry Bags are Zombie Survival Kits for everyday use. For some, there is no difference between a BOB and an EDC Bag. For others, they are a lightweight pared- down BOB.

Being the over planner that I am, I have ended up with several kits: a BOB at home, a kit in my truck, and an EDC bag that I take with me to and from work.

Weapons to defend one’s self in a Zombie attack would be one of the few areas where things diverge from standard disaster a little more dramatically. Considering contemporary Zombie fiction, weapons that might serve you well with humans would not necessarily do well against a Zombie attack. Take tactical pens for example. Much of the focus with various techniques of using a tactical pen is on the nervous system, pressure points, and soft targets like the throat. None of these would be of any use in defending against Zombies. Even conventional weapons like handguns and rifles have a limited effectiveness. The necessity of making a headshot puts much greater emphasis on skill than is attained by most people these days.

Survival Gear is the downfall of most. It’s not that people don’t procure enough survival gear, but rather that they have too much gear and not enough skill. Early on I fell victim to the must-have gear mindset. I spent endless hours painstakingly worrying about which knife was the right knife, which fire starter, which bag for my BOB, and on and on. Skill can usually compensate for lack of gear, but an abundance of gear can’t always compensate for a lack of skills.

This is not to say that you should not focus on gear at all. Good Zombie Survival Gear is very important. Have a good Zombie Survival Kit (BOB), clothes, weapons, and alternate means by which to power electrical devices and you are good.

A friend of mine once said, “My plan is to make a #$%& ton of money. That’s my business plan” when he was asked by a potential investor to see his business plan. This did not work out for him so well and neither would a similar approach work for survival, be it Zombie or anything else. While the best-laid plans may fall apart in the heat of battle, they still provide a road map to follow.

A Zombie Survival Plan should be a loose to tight, (but not rigid) set of guidelines, just as any other survival plan that takes into account things like: communications, supply lines, redundancy, fall back, retreat, etc. Survival Plans need rules, but should have enough room to breathe and allow for improvisation, and that still follows the spirit of the original plan. Simply saying, “My plan is to Survive the #$%& Zombies” is not enough.

Food, water, and shelter are the basic necessities. Everything else is a luxury, but not really. If you have no quality of life, what’s the point? Zombie Survival Supplies should take this into account. I can live off whey protein, oatmeal, and dehydrated vegetables indefinitely, but can my mind survive it? Monotony kills the mind and soul.

Entertainment becomes very important when riding out a Zombie horde. When your mind is left unoccupied your imagination fills the space. In Day By Day Armageddon, the main character makes it through the roughest of times by simply keeping his mind occupied through writing in a journal. He found the will to live, comfort, companionship, and even used it to problem-solve. I am not saying dear diary will save you, but having something to do and something that gives you peace in times that try you, keeps that all-important attitude in check. For him it was a diary, for you, it may be a deck of cards.

How often would you say you get "caught off guard?" In an everyday context, this…

Para-cord bracelets are pretty popular in the survival community. Safe to say, they are one…

Hosts Aaron and Jonathan discuss planning a survival strategy and give a critique of Doomsday Preppers.