In September of 2010 I introduced you to the Nokero Solar Light Bulb. Now it’s time to give you my thoughts after months of strict scientific testing. Ok, so it was not very scientific. Basically we just dreamed up random stuff to do to the three we received and observed how they did.

The Nokero Soloar Light Buld arrived in good packaging and without molestation from the parcel career – always a good day. The design seemed sturdy and like it could hold up to most reasonable abuse. Then came time for the testing.

The days it got tested on were all full sun days and the device was facing South. It got moved around a couple more times in the yard, but with the same results.

For $15, they are very reasonable.

At approximately 2.6oz they won’t weigh your pack down and since they are about the size of an incandescent 60w bulb they don’t take up a lot of space. For some reason I thought they would be bigger, but was happy to find this not to be the case.

They are pretty sturdy. Tossing the Nokero from the second floor balcony of the Urban Survival Podcast studio balcony produced some scuffs, but nothing cracked or came flying off.

Sticking them in the freezer repeatedly produced no ill effects.

The Nokero Solar Light Bulb comes with a rechargeable none branded AA battery. Also a plus, it only takes one. I replaced it with a fully charged Sanyo Eneloop and nothing blew up. When the day comes that the factory AA gives its last, you can replace it yourself with a rechargeable from the store. The nicest part is since it is one of the most common battery sizes, finding a replacement when the time comes will not be an issue – baring some Zombie apocalypse.

Seven months hanging in my backyard and the Nokero is still going strong with little too no cosmetic or mechanical defects. This impresses me most of all. It’s rare that you find anything that can stand up to the elements for even a few months. 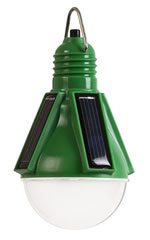 I hung the Nokero from a tree in my backyard and left it for a few days with the switch turned to the on position so the batteries could cycle a couple of times. Being that it was fall, there were no leaves to interfere with the solar panels. Saddly, the most I was able to get out of it was just over an hour – manufacturer claims 2 hours.

At a recent Project Applseed shoot, while camping, I ran the test again with all three solar light bulbs over a couple of clear sunny days. Still the Nokero only produced just over 1 hour of constant light.

Hiking with the Nokero attached to a pack only produced 20 minutes of light on average.

The light is not very bright. In a small tent it did produce enough light to illuminate the tent sufficiantly for most tasks. However, I don’t think most people would be wowed by it. Reading by it will be lack luster at best.

It was difficult – if not impossible – to really tell if the switch was in the on position or not without covering the sensor.

The clip that it comes with will do the job, but is pretty small and flimsy. With gloves on or if you have particularly large hands, you will find it difficult to manipulate. I ended up replacing them with a small light weight carabiner.

There is absolutely no indicator to tell you when the battery is full. At $15 though, I actually wouldn’t expect one.

The Nokero under preformed expectations when it came to light output and longevity. Given the relative uniqueness, light weight, and $15 price tag, I found the solar light bulb to be “good enough” and would buy one. Just don’t expect to get much out of it when hiking and consider charging it completely before use.[/fusion_builder_column][/fusion_builder_row][/fusion_builder_container]

The Stovetec Biomass Stove sat on my shelf for over a year. Having bought it…