Roughly six months ago I got wind that a new personal size solar charger was hitting the market soon. The marketing material made some very bold claims at which most people in the gadget world scoffed at. Having been a little disappointed in my Solio, I did not hold out much hope, but signed up to be alerted as soon as this new solar charge came available.

The day came and a package arrived; whoohoo TOYS! However, when my Joos Orange finally arrived I was short on time setting up the new Office/Studio for the Urban Survival Podcast. As it turned out though, I was due for a five-day trip to Puerto Vallarta Mexico and would be presented with a few situations where this new gadget could be tested.

Ok ok, so it was not a rugged backpacking trip, white water adventure, or anything of that nature. Instead it was two days at an all-inclusive four diamond resort and three days in a seven room villa on the beach. However, after the amount of tequila I was made to drink during the five days of celebrating my friends’ nuptials, I did find a few creative ways to abuse the Joos Orange.

My primary goal for it was to see if I could go five days without using grid power to charge my iPhone.

What It Comes With

The Joos Orange came in a box not much bigger than the device itself. Inside the packaging I found the Orange, a handful of adapters, and two USB cables. One cable was USB to USB Mini and the other was USB to a jack which the adapters fit into. In addition, there was a small plastic bag I assume was for keeping up with the adapters.

Two days before boarding the plane for Mexico I threw the Orange in a wide kitchen window that faces exactly true South – recommended by the directions. It dutifully charged with its red “I am charging – stop poking me” light blinking away. I occasionally picked it up and messed with the sturdy little legs that fold into its body, but other than that I tried to leave it alone and let it do its thing. The morning our adventure began I tossed it in my carry on bag and away we went. At the airport I expected it to get some spanish inquisitions or at least a good groping from TSA, but they opted to harass my girlfriend instead. I guess she looked more interesting.

On the plane was my first real experience juicing the Orange. I plugged it into my iPad using the adapter that came with the Orange and my normal charging/data cable. It worked flawlessly and kept my iPad topped off the entire ride to Mexico’s Pacific Coast.

For the first two days of the trip the Orange lived on our room’s patio. It did a surprisingly good job of soaking up the sun even during parts of the day when it was not receiving direct exposure. At night it held up to being dropped repeatedly on marble floors by a someone who might have consumed a little too much as they plugged it into an iPhone; hey I was on vacation what do you want.

On the third day a few of us went for an all day horseback ride through the backcountry to a waterfall. Having forgotten to plug my iPhone in the night before, I decided to charge it on the ride. Jostling around in my bag atop a horse, the Orange stayed plugged in and doing its job till my iPhone was full. By the end  of the ride it was no worse for the wear of being in a bag bopping around and being tossed into a lagoon next to a waterfall. 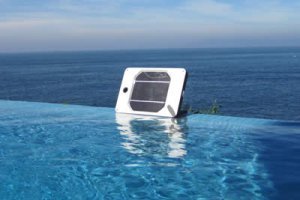 On the fourth day it survived being a foot or two underwater for 5 minutes in a swimming pool and being tossed one story into some grass – once was on purpose. The Orange still showed no signs of damage or diminished ability to charge my iPhone.

Day five the Orange was still going strong. Taking a charge and passing that charge to my iPhone all the way back state side.

So Now The Ugly

Joos is the fastest charging of any personal solar charger I have found, but it is still a solar panel and it will only charge so fast. A couple of hours in mostly full sun yielded a 50 ““ 60% charge. Hence, why I kept leaving the charger out whenever I could.

There are two indicator lights on the front which makes seeing what the device is doing without it loosing exposure possible. The red light blinks when the device is charging. Slow in low light and fast in full sun. The green light blinks to indicate how much of a juice the Joos has stored. Here is where things with the lights get dumb. The green light will blink zero times when it has no stored charge. Then a series (1 – 5) of blinks denoting how full it is. Finally, ZERO blinks to let you know it is full. The signal for “I am full” should not be the same as “I am empty”. It’s not a deal breaker, but just plain goofy as heck.

Joos also has mirrors to increase the output of the Orange, but they are sold separately for $20. They seem to be problematic and look like they would interfere with positioning the Orange, but I will have to get back to this at a later date as I forgot to order them when I was ordering my Orange originally.

No case; not even a cheap plastic crappy one. While the Orange is pretty rugged, it would still be nice for it to have come with something to protect the solar cell from scratches when riding around in a bag.

The Orange is a little more like a Great Fruit; its not small. By volume I would say it is the same size as an iPad and weighs a hefty 24oz.

These few short comings aside, the Joos Orange rocks. If you have been on the fence about getting a personal solar charger now is the time to get off. I like mine so much I am ordering another one.

In the future I hope we see a larger Joos product come out for charging laptops and larger camera batteries needed by SLR cameras.

Joos has introduced a case for the Joos Orange at MacWorld. Warren Sattler – CEO – was nice enough to send us a snapshot. No word on price yet.

Headlamps are the most under appreciated of the flashlight world. People often think of them…

A few months back I came across an article that mentioned private contractors using Glowrings.…