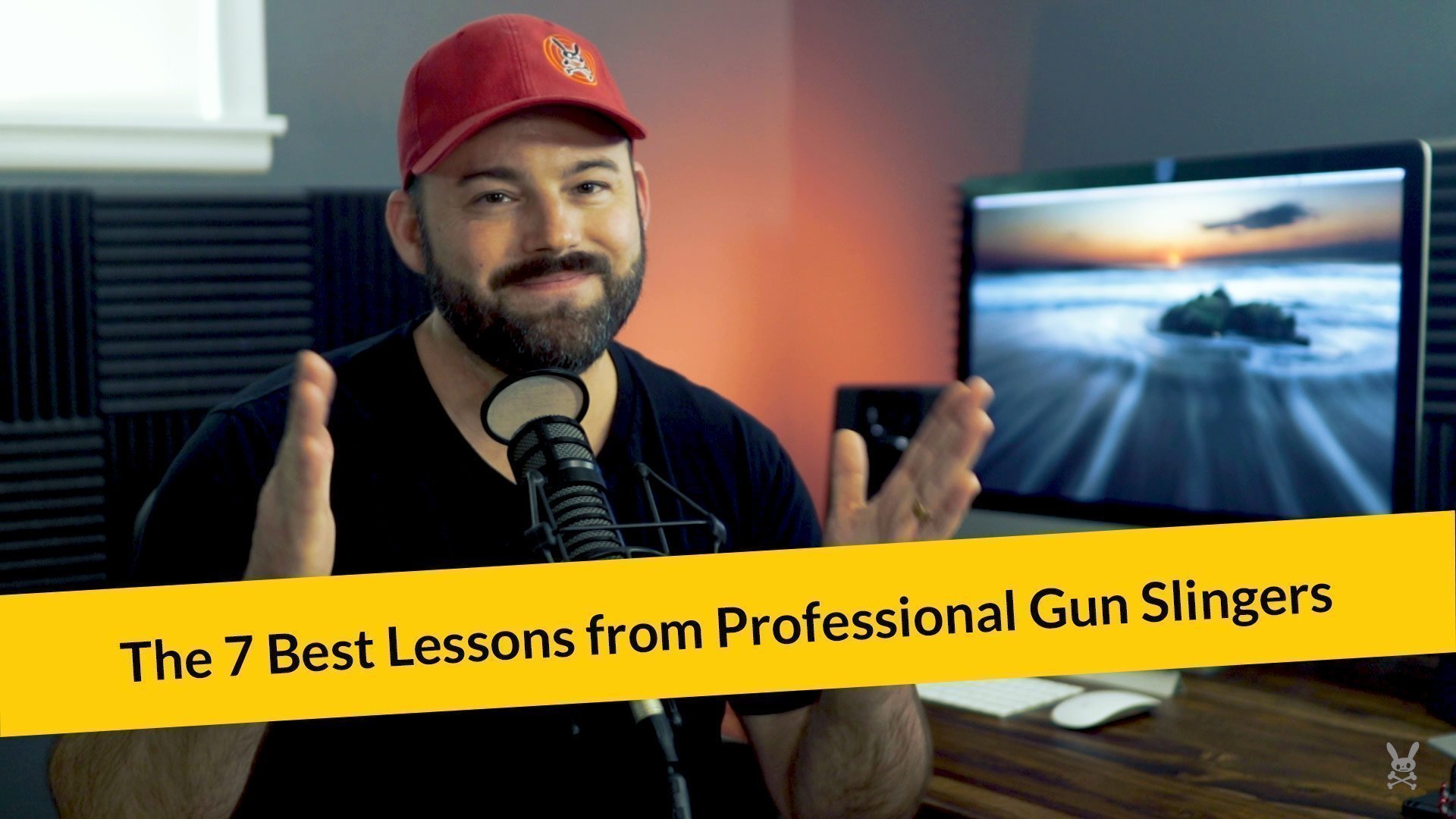 We cover the best advice shared by professional gunslingers and tactical trainers from over the years.

Watch or listen to The WTF is Happening to ITRH Announcement

Now, over the years, some great professionals in the industry have shared important advice with us. Most of this is in the past episodes. Sometimes, it was off-air with people not willing to speak publicly.

These seven points are for the average person. They are not for people who are offensive professionals or high-ranking chair-borne keyboard commandos.

These points are not mine. They are lessons from people with real trigger time and who have experienced being forced to take a life.

I would sum it all up in three categories: Priorities, Purpose, and Probability. Have realistic adult priorities. Understand your purpose and the purpose of your equipment. Judge plans, actions, and purchases based on probabilities. There’s nothing wrong with preparing for the extreme end, but don’t kid yourself. Take care of the probable first.

That brings us to number one: Train for and become proficient in dealing with the most probable first.

Train the way we discuss preparing: Acquire skills to deal with the most likely before worrying about the least probable. This usually begins with learning the fundamentals and practicing them to the point of absolute boredom.

Some like to quip, “Prepare for the worst, and hope for the best.” However, this ignores the probable and only serves overindulgence of the improbable.

Now, that’s not sexy. That’s not Jack Bauer, Seal Team, or Delta. But you and I are not those things. A friend used to have a great expression: You lie to your friends and I’ll lie to mine, but let’s not lie to each other or ourselves.

If you’re not prepared for a job loss, a house fire, an economic event, or a localized natural disaster you’re not going to make it to the zombie platypus apocalypse.

Number two: equip for and learn the fundamentals to the point of proficiency.

This was something I really ignored in my twenties counter to the gentle advice from trainers.

Whizzbang gear is cool and offensive training is fun. But both are preparing for the improbable at the expense of the probable. The fundamentals also happen to be inexpensive.

Many moons ago, after several tactical pistol and rifle classes, it finally dawned on me my accuracy was not improving significantly. The trouble was, I was attending exciting classes. And that is mostly what was being offered by trainers. The reason is simple: people want to feel like they’re high-speed-low-drag.

Become really good at the basics. Focus on proficiency and defensive skills. Practice them to the point of unconscious competence.

Fortunately, I eventually stumbled upon Project Appleseed. When the podcast ends, becoming a regular again is at the top of my to-do list. You should check them out.

You’ll often hear people say, “I’d die for my kids.” I understand the trope. But it is generally said with a lot of emotion and without much thought. How about do everything to stay alive for your kids instead. Less romantic, for sure. However, it’s a significantly more responsible way of thinking. What are your kids going to do without you?

Why is this important?

Knowing what your responsibilities and priorities are will help inform your decisions, plans, and beneficial preparations. It will help guide the kind of classes you take, what you spend money on, knowing when something isn’t your camel.

I’m not going to tell you what yours should be. That’s for you to decide.

For me, my responsibility is to make it home to my wife in one piece and in good working order. Anyone, anything, any thought, or any action that jeopardizes that is to be avoided. Anything that lessens my ability to address probably near future needs at the expense of improbable events is avoided. That’s not to say I don’t prepare for the worst. It is to say I put it lower on my priorities.

That brings me to number four: Find and take run-the-hell-away 101.

Tactical courses focus primarily on offensive tactics and training. This is a trend of the last ten plus years. They’re an answer the government’s needs and the desires of the consumer. Everyone wants to be a tier-one badass. Hey, me too.

You see this with the advancing drills so popular in classes these days. Ask yourself this, though: why would you close the distance? Your probable threat has less training in accuracy than you do. So, why would you decrease your advantage and increase the advantage of the type of foe you’re likely to ever engage?

Away from earshot, seasoned trainers with real-world trigger time will tell you this:  learn to get out of situations and put distance between you and the problem. If it’s not your profession to charge into the fray, don’t make it your problem.

Everyone wants to get kitted up and play. It’s fun. Again, I like it too. But you’d be far better served by a tactical course that listed bathrobe and house shoes as the recommended attire.

Number five: classes are for getting past plateaus.

It’s very easy to become information or class junky. The real value in classes is getting the information and then turning it into knowledge and skill, though. This requires practice.

Take a class in your tactical bathrobe, practice until you hit a wall, then take the next class. Rinse and repeat.

When you practice to plateau, you will then be able to go back to the instructor with good questions. You will show up with experience and that will help you get the most out of the next class.

There is a caveat. If you’re just taking a class for fun, then ok. But admit it. Jonathan and I went off to Las Vegas and spent a couple of days at Rifle Dynamics learning how to build AKs. It was a blast. The experience was really about getting a chance to hang out doing something we enjoy: playing with guns.

Number six: Spend more on classes and practice than gear.

You need to be able to run your equipment like a boss more than you need the most expansive or three copies of equipment. Yes, yes, two is one and one is none, but if you cannot use it or use it well… then two, three, four, or five is still none, no?

This isn’t to say you shouldn’t purchase the best gear you can. Just be smart about it. Don’t buy top-shelf gear at the cost of not being able to afford training or the means to practice often.

Stress inoculation comes in many forms. At the low end, there’s just learning to be ok with being uncomfortable. At the other end is doing force-on-force training.

I was once at a shooting class. One of the other attendees was very obviously a prepper. He was very sure the end was coming. He also complained about everything and enough to be noticed.

At one point, he complained about his rifle sling being uncomfortable. Two instructors looked his sling over and talked to him about it. He complained loudly one last time. Finally, the most senior instructor gruffly replied that if his sling was comfortable, he was doing it wrong. The classmate huffed, gathered his things, and quit.

Granted, the instructor could have said it with more care and finesse. But if you can’t take being uncomfortable and a salty old instructor not coddling you, what do you think the zombie platypus apocalypse is going to be like?

At the other end is force-on-force. If you think you’re going to need to use any of this, you need stress inoculation. It will happen fast, it will be brutal, and your advisory will likely have been born and raised in a hellish environment. A life of stress inoculation, you might say. What do you have?

Hosts Aaron and Jonathan discuss planning a survival strategy and give a critique of Doomsday Preppers.

Hosts Aaron and Jason give an update to the urban farm project and discuss the debut of a huge new project. Listen now...

Hosts Aaron and Jonathan are joined by Ron Davis host of Confessions of an EMS Newbie Podcast for a discussion on common emergency medical myths.