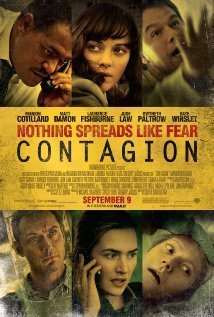 Contagion is a new movie with a high powered cast about the spread of a viral pandemic. It shows the expanding viral epidemic from a number of perspectives and will make any prepper think.

A pandemic is something preppers should be thinking about. In the disaster matrix, it is probably the most devastating thing that is most likely to happen. In reality, we’ve actually had a couple of pandemics – H1N1 and SARS are both examples of viral diseases that spread across the whole globe and killed thousands. We’ve been lucky that the organizations charged with stopping these things did a very good job of catching them early, isolating them, and creating vaccines.

This movie reminded me a of a documentary I once watched on the Influenza epidemic that killed hundreds of thousands of people in the US in 1918. One thing from that movie that struck me was a comment about how the scientific community was very confident when it came to diseases. They knew bacteria were the cause of much disease. They could and did create vaccines before this epidemic and during it’s spread they kept making vaccines which kept them ahead of the outbreaks.

The problem was that influenza is caused by a virus which is a very different thing. They were battling with the wrong kind of cure.

In the end the thing that stopped the dying was quarantine. Or as they called it in Contagion, social distance. Which is the first thing a prepper can learn from the movie.

It doesn’t matter what the actual disease is, if you aren’t around someone who has it, you aren’t going to get it. Period.

In Contagion they make the point that the virus is transmitted not just by getting coughed on, but by touching something that an infected person touched. You can’t even go places sick people have been.

Are you prepared for that?

There were two points I kept thinking of while watching the movie:

1. The plague went on for 144 days. Schools were closed, shopping malls were closed, nurses stopped going to work. Can you live on your own for 5 months? Do you have enough food and other supplies?

2. If you have to deal with a place where other possibly sick people have been, do you have protective gear? To use EMS terms, BSI (Body Substance Isolation), PPE (Personal Protective Equipment), “If it is wet and sticky and not yours don’t touch it.” Of course in the case of Contagion it doesn’t have to be wet or sticky to be deadly.

Basic PPE should include gloves, eye protection and N95 masks. You should have a lot of these in your long term prep stores and a few in your everyday carry gear.

In addition, you need virus killing cleaning stuff. One of the characters and his daughter live in a house where two people died of the plague. How much cleaning did he do? It isn’t shown the movie, but it had to be extensive.

There are plenty of antiviral cleaning solutions out there, and in the end a little bit of bleach in some water will do a lot toward killing viruses.

Preppers are generally more prepared for this. Most are prepared to defend their home from invaders. But there is more to social breakdown than looters and criminals. There is also the fact no food is being delivered to stores. UPS and FedEx aren’t delivering packages. The pharmacy is closed. You can’t call friends over because you just lost your wife and son to the disease and need comfort.

The other point is that you aren’t going to be able to get around the government. I always find it strange when people hear their area has been quarantined and decided to leave. They sit in a line of cars to get to a road block and then start arguing with the national guardsman who won’t let them through. Really? Do you think that is going to work? You’ll be lucky if you don’t get shot for trying.

Should preppers see Contagion? Yes, absolutely. It gives perspective on what is going on at high government levels – the CDC and WHO – as well as what it is like for regular people. It will make you think, and thinking is central to preparing.

Ron is an EMT-I in Texas and co-host of the EMS Podcast Confessions of an EMS Newbie, where he and his paramedic guru discuss what he's learning in paramedic school every week.

He's also the co-host of the Photographer and Model Podcast, where he interviews photographers and models.

After five plus years of use, my Coleman PerfectFlow 2-Burner Stove has held together through…